So Small, But Already A TV Star | New York Times

By PENELOPE GREEN       JULY 2, 2014 Zack Giffin is an extreme, or “free,” skier and tiny-house booster, having made his home for the last three years in a 112-square-foot mobile “ski chalet.” This year, Mr. Giffin, 34, is a host of a new series, “Tiny House Nation,” beginning Wednesday on FYI, an A & E Networks channel that used to be known as Bio. When we caught up with him by phone last week, he was on the road for the show, which chronicles those who live the tiny-house life. The chalet, he said, was sitting on a trailer “in a lovely field in Lummi Island, Washington State, on my parents’ property, which is where it lives when we are not around.” (He shares it with his girlfriend, Molly Baker, 30, who is also a skier and was away working for a ski sponsor in Austria.) The couple have used their tiny house as an assist to their lifestyle, to help them get close to the mountains, mostly in the Northwest. (This interview has been condensed and edited.) Q. Is your tiny house your only abode?

A. Yes, because of our jobs and our schedules, the tiny house is perfect. We’re not locked into the rent or the mortgage scenario. 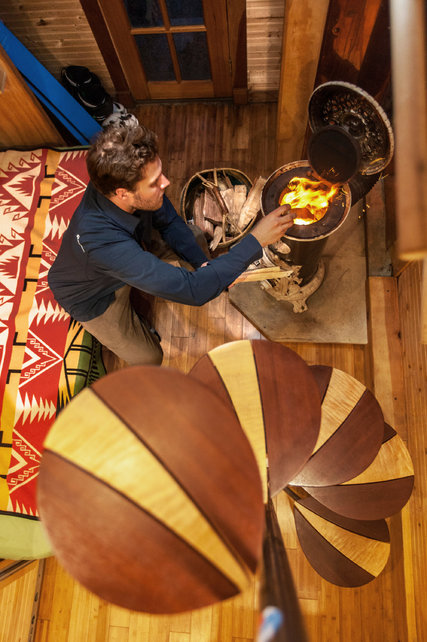 How do you find places to park it?

Because it’s so self-contained and not an eyesore, the owner of Chair 9, a bar in Glacier, Wash., has given me an open invitation to park in his parking lot. Or I park it in the parking lot of the ski area we’re in. Here is the thing about the tiny house: It skirts the stigma of the traveler because it’s adorable. It’s made of high-quality materials. It’s built with a whole lot of love, and that’s very apparent.

What have you learned from living this way?

It has maximized what I’m able to do with the young years of my life. I’ve broken down into four categories what leads people into getting involved in tiny houses. One is they’re looking to live this young, adventurous lifestyle and avoid getting trapped in the machine. The next category is minimalism, the idea that you have all this clutter in your life but is it better? People have come to the conclusion that to downsize their living environment frees up their time and allows them to pursue their passion and spend more time with their family. I would say that’s the main area the show tries to focus on. The next would be economics. The tiny house becomes a viable solution for those who want to retire but don’t want to live in a trailer home built in a factory, their best option for living happily because their 401(k) isn’t coming through. The fourth would be environmental. It is this radically significant thing you can do that has real environmental benefits. And you only have to do it once. You don’t have to wake up every morning wondering whether you’re going to drive to work or take the bus.

Let’s get really specific about what’s in your house. What kind of toilet, for example? Is it a composting toilet?

I opted not to build one. With strategic parking and partnerships, not everyone should have to have their own toilet. There is room to re-evaluate the mode of what it is a house needs to be. There are communities that are starting to allow tiny houses to get together, and it’s like the marina. The toilet and the shower are shared. For the shower, I have a backup. I have a wood stove, and in the wintertime you take snow and melt it on the stove. I have a cistern that is gravity fed and it’s an outdoor shower. It’s totally self-invented. In all honesty, the water pressure is a little bit less than it could be so I am planning when I get a little time to connect to a water pump. The only challenge is getting from the front door to the shower.

I spent almost $25,000 on my house, not including my labor. It took me seven weeks full time to build it. The biggest expenses were the trailer and the appliances (refrigerator, water heater, inverter-converter, generator and the wood stove parts). The only labor I paid for was the painters. I think I spent around $7,000 on the lumber, doors and windows. I could have saved a lot of money if I had spent time finding used appliances, but I was under serious time restrictions.

What are your yearly expenses, including gas? Have you ever added them up?

No, but I have tallied up the mileage. We’ve taken the house over 21,000 miles in three years. That could be a world record for a tiny house.